Blu-ray discs provide enormous storage space for files and data. Unfortunately for users, most PC's do not have a build-in Blu-ray burner as standard equipment.

People in the modern world prefer to use Blu-ray discs in order to save their important files. They have the potential to save more data and are reliable than DVDs. These unique features have played a major role behind the popularity of Blu-ray discs and it can also be considered as an excellent alternative available for USB flash drives. In order to save your data into a Blu-ray disc, you need to get hold of a reliable free Blu-ray burner. And you need to find an great Blu-ray burner so all their content can be stored on Blu-ray discs and be played in the highest definition. Here is a list of some of the most popular free Blu-ray burner software that can be found on the Internet.

Wondershare DVD Creator enables you to do the conversion in a way that you will not get frustrated at the end. In just few clicks, you can now create your own DVDs and Blu-ray Discs. You can efficiently burn videos, images, and audios and create multiple DVDs through the help of this powerful and easy to use DVD and Blu-ray creator. It enables the users to create their own DVD/BD masterpiece with music, video and photos. You just have to simply drag your desired feature into the DVD Creator and make some adjustments to ensure quality the click “Burn”. You can also use the built-in editor if you wish to combine photos, music and videos in a slideshow, home movies and or whatever you want to make. And currently it's fully compatible with Windows 10.

In this part, you are going to learn how to burn videos or photos to Blu-ray disc with Wondershare DVD Creator step by step.

Download, install and open Wondershare Blu-ray burner on your PC, then choose Create a Blu-ray(BDMV) Disc option from the intuitive interface it displayed. 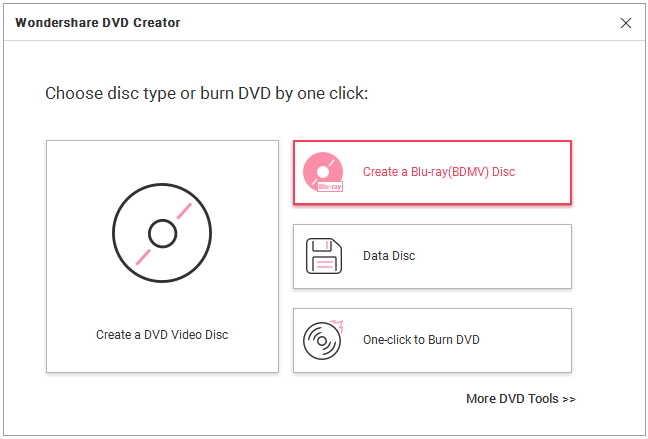 Click the " + " icon on the interface and then you can add files present on your PC. You can also add files with simply dragging and dropping to the interface. All added files will be displayed as thumbnails on the left panel. 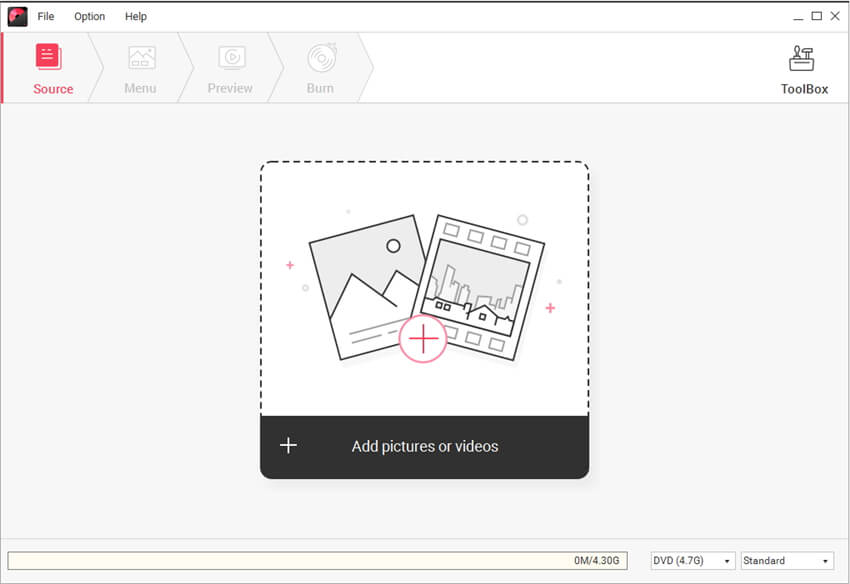 For video editing, you need to click the pencil-like icon on the thumbnail to open the Video Editor window. From this pop-up window, you can edit videos by cropping, trimming, rotating, applying effects, adding watermarks, and others. Just skip this step if you don't want to make changes on your video. 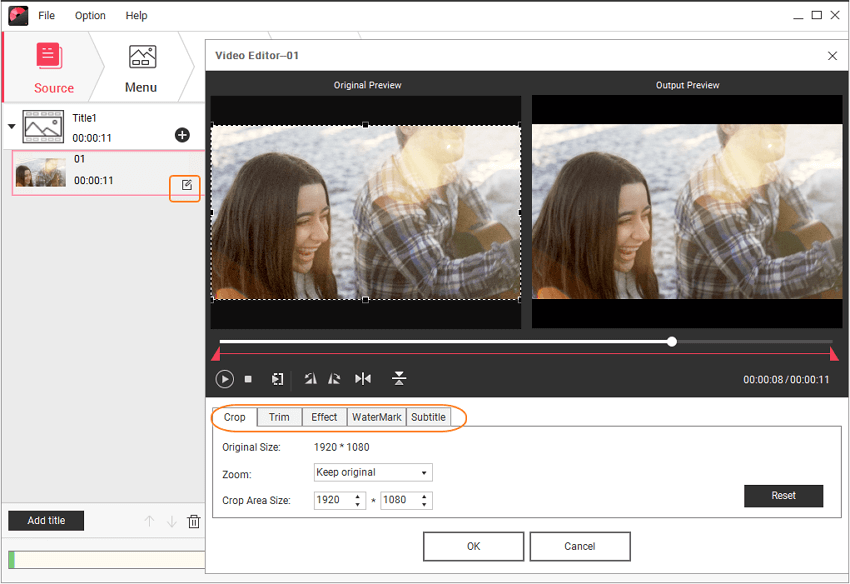 Go to the Menu tab and choose a Blu-ray disc menu from the template designs it provided on the right panel. For further customization, you can click the icons upon the active window and you'll be allowed to change background images, add music, adjust aspect ratio, etc. And click on the arrow icon to select a frame for your Blu-ray disc menu. 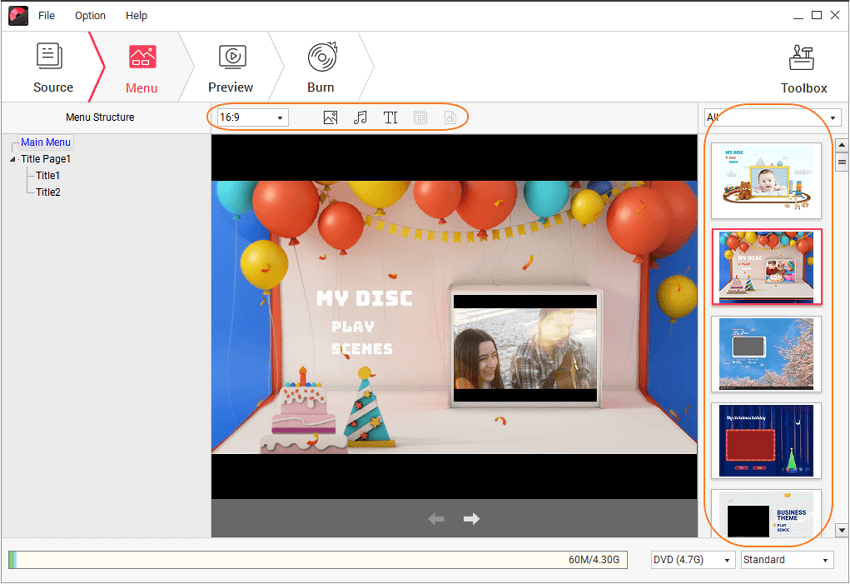 Switch to the Preview tab to check your creation. If you're not satisfied with it, feel free to go back and make adjustments. Next, click the Burn tab and choose Burn to disc option, select Disc Label, Burner, TV Standard and other burn settings. Finally, hit the Burn button to start burning videos to Blu-ray disc within minutes. Save as BDMV files for later burning is also supported. 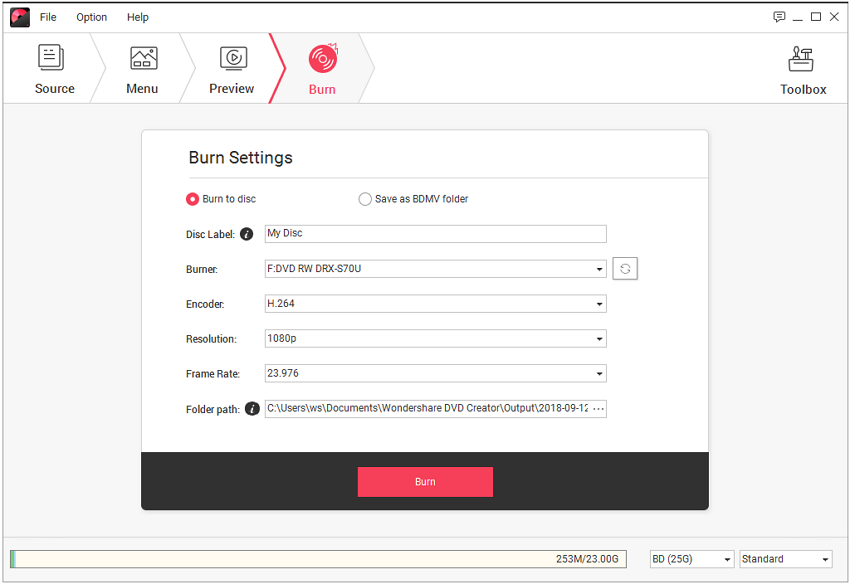 Hereby! We assure that all the above steps are true and have been implemented in a hierarchical order. Try to create a creative Blu-ray disc with easy-to-use DVD and Blu-ray burner software -Wondershare DVD Creator.

Express Burn can be considered as a simple, yet powerful free Blu-ray burner software available out there. It is based on a propriety optimization system. In the official website of Express Burn, they have claimed that it is the fastest disc burning software available in the market. The customer reviews available online bear testimonials to prove the above mentioned fact. It has some impressive features such as the ability to record video files in NTSC and PAL formats. Moreover, you can select the standard video format or go for widescreen. 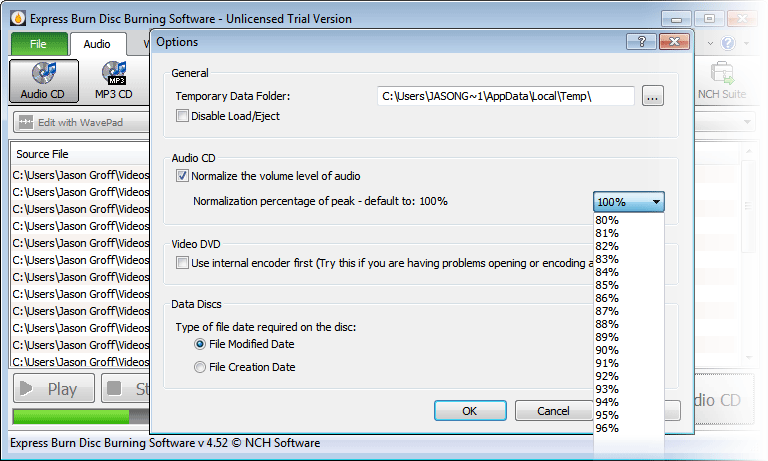 StarBurn is a free Blu-ray burner from Rocket Division. It is a fully featured disc burning application that is equipped with a nice GUI interface. In this interface, you can find separate options that can be used to burn data, audio and video files into your Blu-ray discs. You can even use this free Blu-ray burner to create ISO images. The unique features that can be found in StarBurn include its ability to compress audio and erase discs. 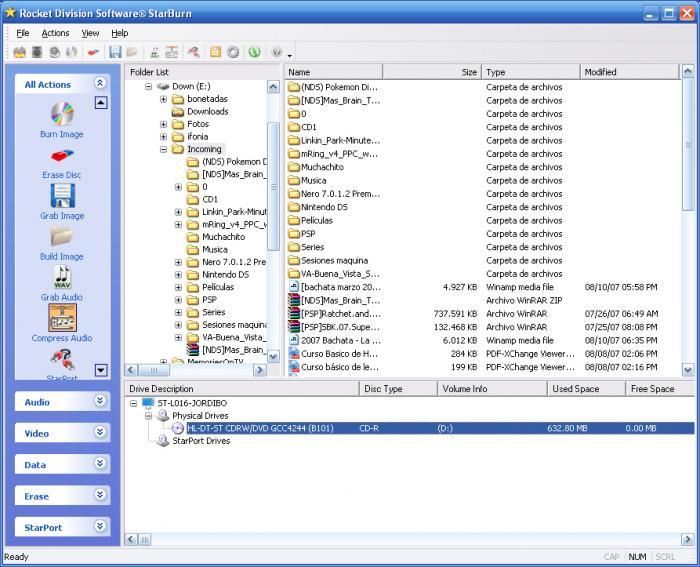 This is one of the most colorful free Blu-ray burner software that you can download from the Internet. They have also stated that they provide the fastest burning experience to the users. IQ Mango Burner is compatible with a wide range of file formats including MKV, MOV, WMA, WMV, MPEG, AVI, WAV, MP3 and many other audio and video files. The graphical user friendly interface of IQ Mango Burner helps people to use it with minimum hassle. You can go through a hassle free Blu-ray burning process. It can be downloaded for free from their official website. 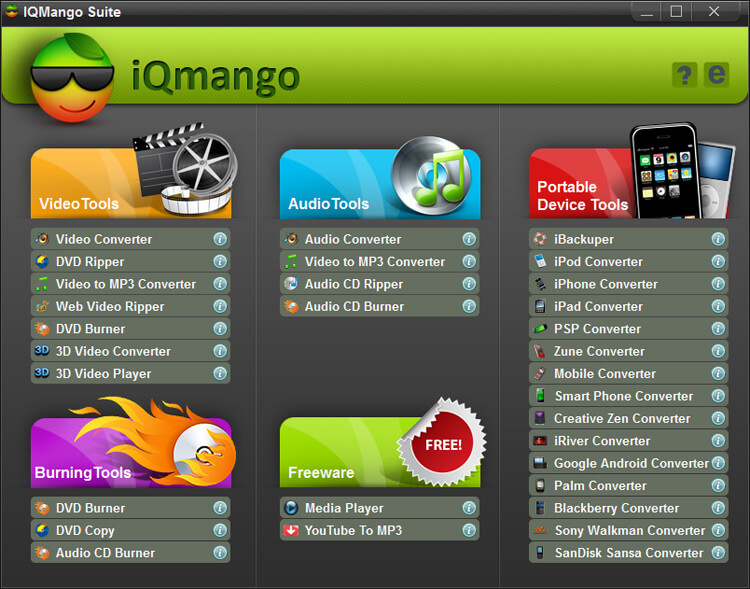 Hanso Burner can also be considered as a simple Blu-ray disc burning software available for the modern world computer users. If you prefer convenience and simplicity in applications, you would love to use this free Blu-ray burner. In the main interface, you can find seven main categories. They will give you the ability to burn data discs, data Blu-ray discs, audio discs, video discs, write images, copy discs and read discs. There are the only options that you can see and there aren’t any overcrowded tabs, icons or windows. It performs efficiently when burning Blu-ray discs and you can easily get the job done within a short period of time. 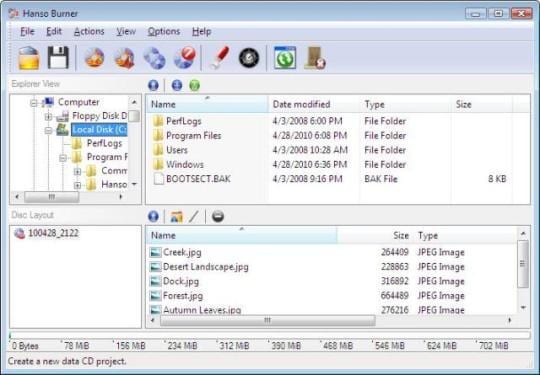 This can be considered as the simplest free Blu-ray burner that we have got in our list. Even though it offers a minimalistic user experience, it has the potential to deliver a complete Blu-ray disc burning experience to the users. In other words, it has almost all the features that you need to have in order to burn a Blu-ray disc without any hassle. It is a very simple application of few megabytes and you can download for free from the internet. 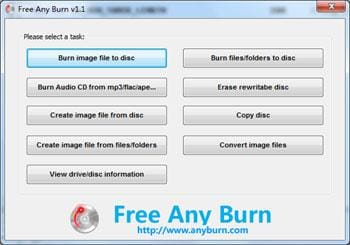 Ashampoo is a popular Blu-ray disc burning software available out there on the Internet. This blue ray burner offer several unique add-ons for the people who are interested in burning Blu-ray discs. You can even use this application to RIP audio discs and create password protected Blu-ray discs. In addition, the features in Ashampoo free Blu-ray burner can be used to back up the important files in your computer and restore them at a later stage. Unfortunately, this blue ray burner is compatible only with Windows operating system. 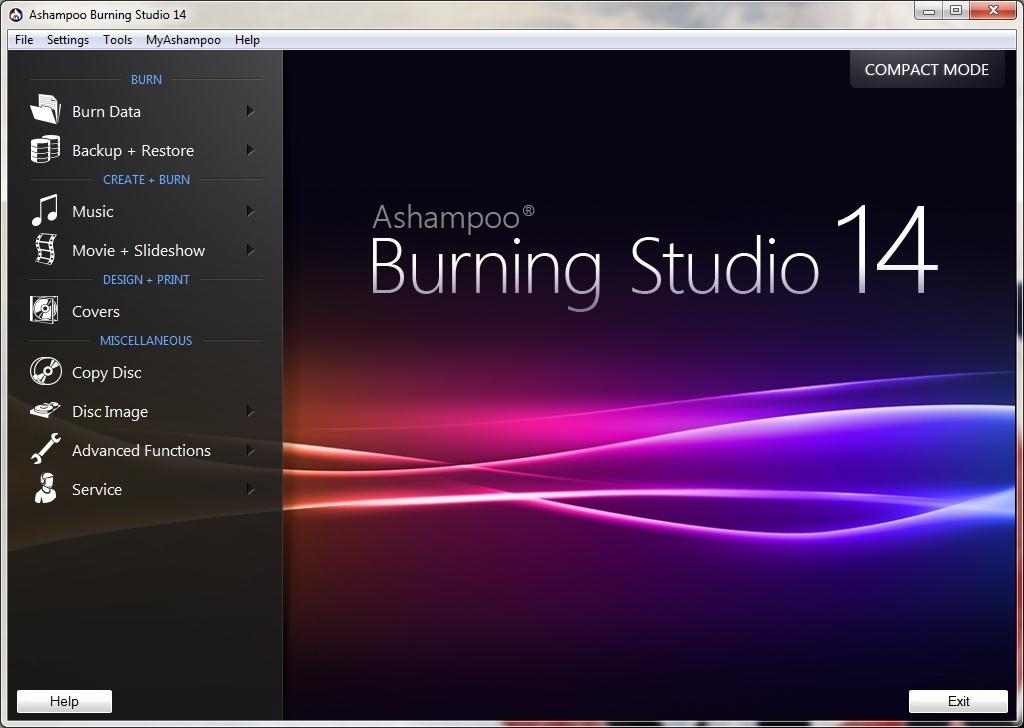 IMGBurn can be considered as the most popular free Blu-ray burner available up to date. Thousands of people who live in every corner of the world have downloaded this free tool and have experienced a hassle free service. The innumerable customization options offered by it have played a major role behind the above mentioned fact. The interface has almost all the options that you would need to create a perfect Blu-ray disc. This advanced free Blu-ray burner can be downloaded for free from their official website. 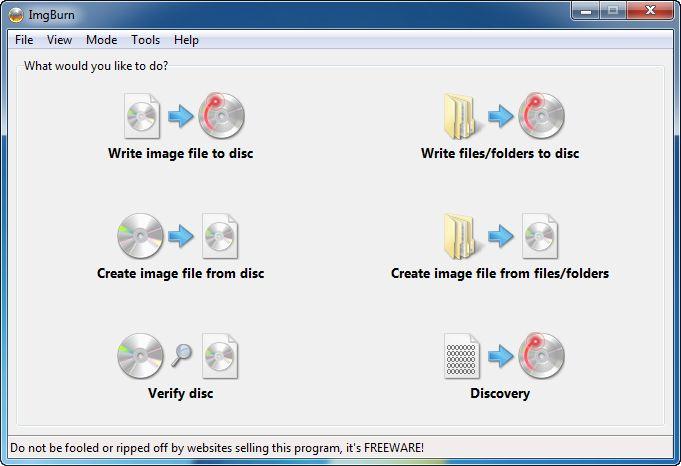 Infra Recorder free Blu-ray burner comes along with minimalistic features and a very clean user interface. These features have contributed a lot towards the popularity of this disc burning application. Infra Recorder offers almost all the options that you can find in a traditional disc burning application. The best thing about Infra Recorder is that it can be downloaded from the Internet for free. Moreover, it is compatible with all the major operating systems as well. 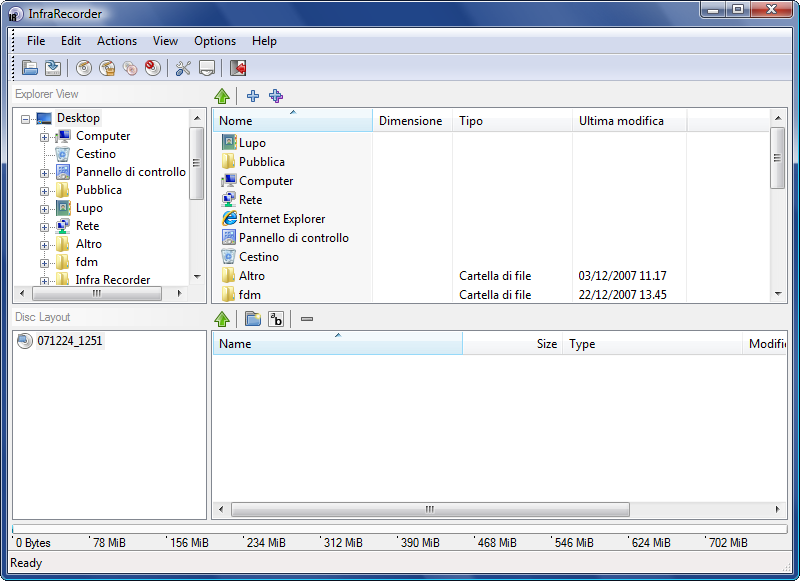 CD Burner XP is a free blu ray burning software that has been there for a long period of time. Along with the time, they have included Blu-ray disc burning ability to it in order to cater the needs of users in need. This is another free Blu-ray burner that comes along with a minimalistic user interface. All the operations of this application are well organized and you can easily get the job done without any issue. This blu-ray burner can even be used to create bootable drives. 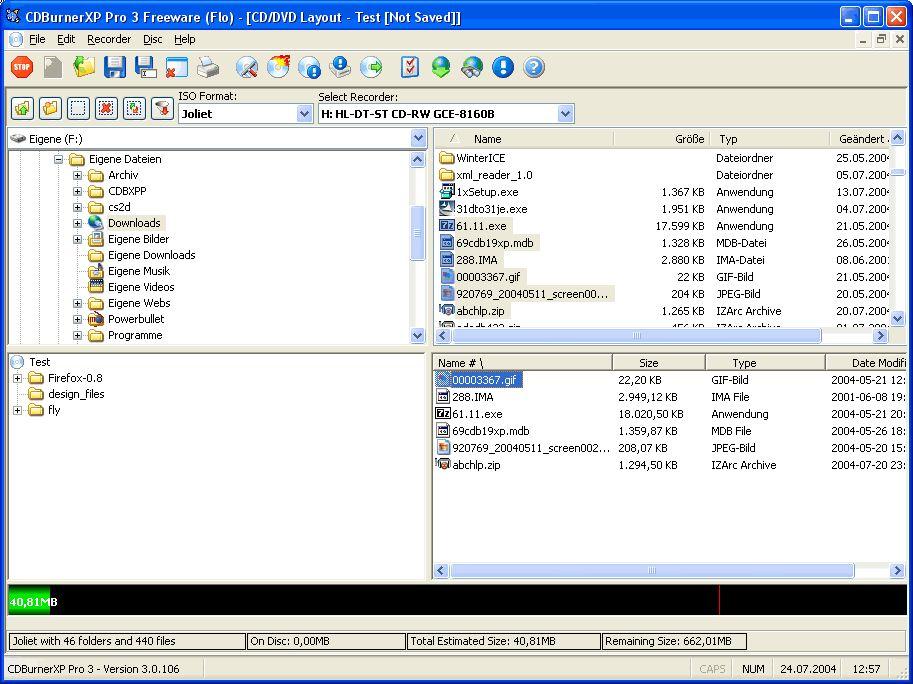 Burn Aware can also be considered as an excellent Blu-ray disc burning software that you can find on the Internet. It comes in two different versions as free and paid. The free version of this blu ray authoring software has all the features that can be used to burn a Blu-ray disc without any restrictions. You can even use it to create bootable discs and disc images. It has a well-organized interface as well. 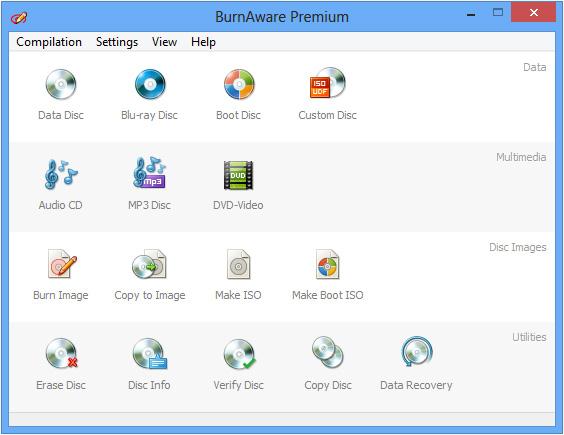 Finding the best Blu-ray burner for you means considering your needs and what would be compatible with your PC. Not every external disc writer is supported by a computer's hardware, so it's important to figure out what your equipment can work with and what would be a wasteful purchase. Here we highly recommend Wondershare DVD Creator which is such a easy-to-use Blu-ray burner both available on Windows and Mac.

Top 12 DVD Burning Software for Mac You Should Know 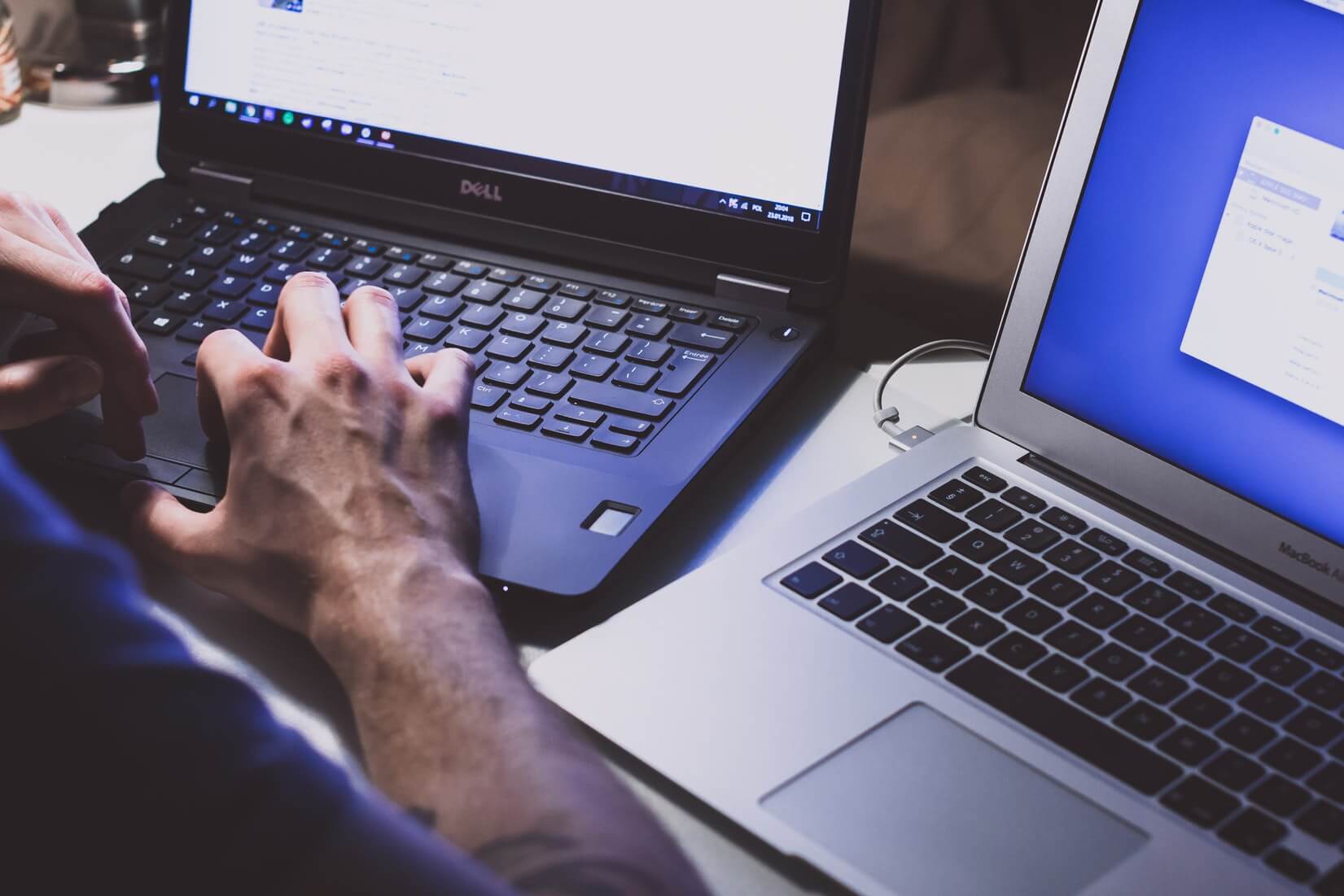 · How to Burn CD Online with ease [Tutorial]

· How to Burn Data DVD on Mac Easily

· Bootable ISO Burner: How to Make a Bootable DVD from ISO